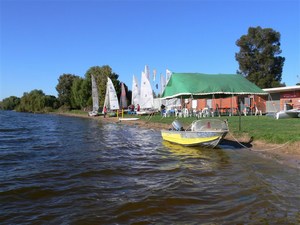 The Lake Boga Yacht Club is renowned for its Annual Easter Regatta which was first held in 1937, the regatta could not be held during the 2nd World War but had been held every year until recently when due to severe drought conditions the lake went totally dry for almost four years. Many of the regattas held over the years have had well in excess of 250 yachts competing in them, which created a spectacular site on the lake. Apart from the clean open waters of the lake a major attraction to Lake Boga is that the regatta participants are able to camp near their yachts in the grassed parklands surrounding the yacht club. In mid 2010 the lake was once again full, enabling the yacht club members to sail regularly during the warmer months and to organise their Easter Regatta again. 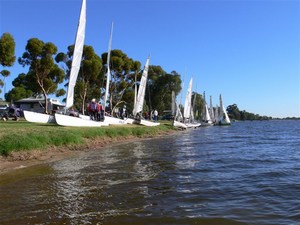 Many of the Lake Boga Yacht Club members travel to other yacht clubs through out Australia during the year to compete in Regattas and National and State Title events, in which many members have been very successful. The club has been the host of many National and State Title events held on Lake Boga for various classes of yachts over the years, and will continue to do so now the lake has a more consistent water level .